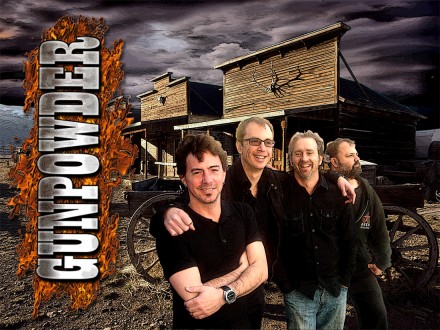 Four Outlaws riding out from the farthest reaches of the West, coming together in a musical juggernaut of apocalyptic proportions bringing musical ecstasy, chaos and joy, and destroying all concepts of popular music that dare to cross their paths. Featuring on lead vocals and rhythm guitar Major Erik Core. He’s been called “the Mariachi from Hell”, by the East Bay Express and described by Censor This as “Bob Dylan on PCP”. On guitar and vocals is the legendary Doc Sauter, he fears no challenge and proudly rides with the Major into battle against the forces of mediocrity.  Pancho Lamonte on the skins, with his solid rock-steady rhythms he drives the war beat that becomes our battle cry, leading our war wagon on to victory and freedom from generic whiny pop rock.   Al Yippee Ki-Yay. on bass, and heavy lifting duties. Al’s playing can only be described as thunderous, mountainous, monstrous, a four string one man earthquake.

The coming together of these greats is something the world will be grateful for a long time to come. The time is now! This is the first, second, and third coming all in one rock and roll moment. Stop waiting and hop aboard for the wildest ride of your life. Gunpowder is what you’ve been waiting for!

Major Core was formerly assigned to the 7th Cavalry, but was forced into ‘early retirement’ for undisclosed reasons. Some think it has something to do with the fact that he has a penchant for pissing off THE LAW everywhere he goes for absolutley no reason at all. You can often find the Major frequenting the local Spanish speakeasys as he practices up his linguistic skills for his impending move to the lower Americas in order to avoid his shady past and THE LAW.

The Doc is famous for his technical abiltiy, from popping whiskey bottles open with lit sparklers, to rigging makeshift gatling guns out of old cigar butts. He is wanted by THE LAW in most counties for causing random mayhem and obscene trickery.

Hailing from lands far away, Yippee Ki-Yay was a poor Yak farmer who had to flee his native country after an unfortunate and quite difficult to explain incident with THE LAW.  All we really know is it had to do with a rather large angry mob of partisans, of whom none remain to tell the tale.   Yippie arrived in California and signed up to the Major’s posse, putting his Yak skills to good use. He manages to hold down the heavy with the skill of no equal.

Before Pancho signed on with GUNPOWDER he led peasant armies to swift victory over the corrupt and repressive local LAW officiales in Old Mexico. With his righteous indignation and flagrant disregard for THE LAW, Major Core sought him out to continue the fight on tyranny and tired rock standards throughout the Estados Unidos. He can also play a mean round of poker, and has the sticks to back up his hand, if you get my drift.

Sammy is known for his ability to wrestle live rattlesnakes with his feet while playing his six string fiddle. With a mean cooking skewer in one hand, and a broken beer bottle slide in the other, he often goes out of his way to taunt members of THE LAW into outright agitation! He’s also able to rustle up some good grub for the gang while on the road. Sammy has retired, but makes the occasional appearance when in town.

Kenny Lawless – The man, the myth, the legend aka “The Most Dangerous Man” alive.  His origin remains a mystery, though some believe he was sent to this planet to teach us compassion through art. With his mighty pen he created the classic Gunpowder logo, he also formed the basis of the sound,  broke a lot of drums, and he burned up like a bad roman candle. Currently living with Sid Barrett in the home for incurable optimists, Kenny continues to draw and paint, and inspire everyone. When God said “bless you”, he meant it for Kenny Lawless, and he also meant F*CK THE LAW.

The Gubna, the high priest and spiritual director of Gunpowder, was last seen setting out homing beacons on Machu Pichu for the mother ship. He is a master of the elements, fire, water, air, and earth. Fireballs blaze from his eyes as lightning finds itself dancing from his finger tips. He is a pilgrim of life, spreading the message of Gunpowder to the farthest reaches of the Earth. At one time THE LAW thought they had him cornered for crimes against physics, but he simply levitated his way out, and left them with only a rainbow, forever searching for his pot of gold.